“Lost in Your Eyes” is the sixth single from American singer-songwriter, Debbie Gibson, and the first from her second album, Electric Youth. Released in October 1988, the power ballad climbed to number one on the U.S. Billboard Hot 100 singles chart and remained there for three weeks, becoming her most successful single. Additionally, it reached number three on the Billboard Adult Contemporary chart. The song was written by Gibson in late 1987 and published by Creative Bloc Music, Ltd. and Deborah Ann’s Music in early 1988 (rights now administered by the Music Sales Corporation (ASCAP). A beta arrangement had been performed on the Out of the Blue Tour.

One variant mixed from the original multitrack, “Lost in Your Eyes” (Piano and Vocal Mix/3:34), was only available in Europe as Track 3 of the CD3 release #A8970CD. The song is mentioned by name in Kimya Dawson‘s, “Caving in,” as the singer’s preferred alternative to “Unchained Melody“. (source: Wikipedia) 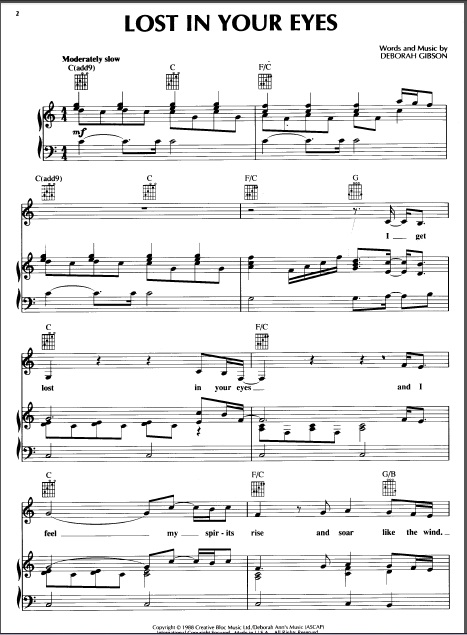 About the Music Sheet:

This sheet has 6 pages, in C key and in pdf  file format.