“If You Leave Me Now” is the title of a popular hit ballad by the American rock group Chicago, from their album Chicago X. It was written and sung bybass guitar player Peter Cetera and released as a single in July 1976.

It is also the title of a compilation album released by Columbia Records (Columbia 38590) in 1983.

The single topped the US charts on October 23, 1976, and stayed there for two weeks, making it the first number one hit for the group as well as hitting number one on the Easy Listening charts.[1] It also reached #1 in the UK on November 13, 1976, maintaining the position for three weeks. It was popular in multiple radio formats, and at one point during its peak listeners could hear it being played simultaneously on four different New York City radio stations. 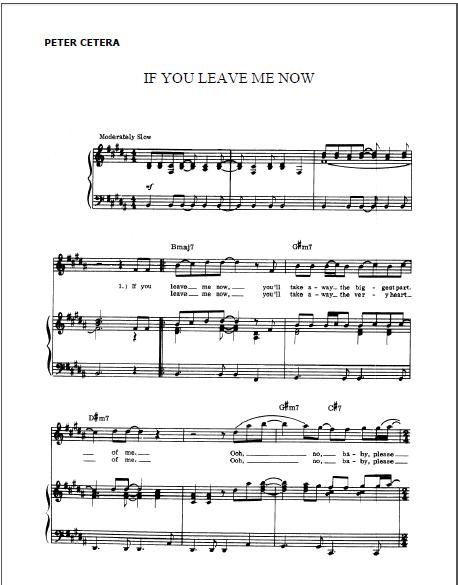 About the Music Sheet:

This sheet has 5 pages, in B key and in pdf  file format.

Download “If You Leave Me Now” Music Sheet here:
http://www.ziddu.com/download/16257951/IfYouLeaveMeNow-Chicago.pdf.html